The latest quarterly data report from English Australia covering the second April-to-June period of 2021 (Q2) shows the continuing decline of the ELICOS English language sector due to Australia’s closed borders, with a further 53.2 per cent decrease in student numbers.

The Quarterly ELICOS Market Insight Q2 2021 report, commissioned by English Australiaand conducted by research partners Bonard, was completed by 95 English language providers in Australia, and historical comparisons are based on 91 providers who also completed the Q2 2020 survey.

Of the 95 providers that completed the latest survey, 15 had no enrolments at all in 2021 Q2 and six of those colleges were in hibernation at the time of the questionnaire, the authors said.

The largest source market China registered a relatively small decrease at 36 per cent in Q2, perhaps reflecting that the fact that as the first country affected by the Covid-19 pandemic, Chinese enrolments were already heavily impacted by 2020 Q2.

In contrast, the Latin American markets of Colombia and Brazil recorded decreases in student numbers of -67 and -68 per cent respectively. The top five source markets were completed by Japan (-44) and South Korea (-46). Among the top 10 source countries, India had the smallest decrease at only -18 per cent.

Some smaller markets within the top 25 actually increased enrolments, including Myanmar (+120 per cent), Bangladesh (+77) and Iran (+90).

Students studying offshore were calculated within the ‘other visa’ category, and China was the most prominent in this segment with 248 students, followed by Japan (62), Colombia (60), Brazil (58) and Korea (56).

Agents accounted for 86 per cent of the students enrolled in Q2, a figure consistent with previous surveys.

By state, providers in Queensland/NT suffered the largest decline in Q2 2021 with a 67.5 per cent decrease in students, followed by those in New South Wales/Australian Capital Territory (-55.9) and Victoria/Tasmania (-48). Colleges in South Australia had the lowest comparative decrease at 30.3 per cent.

Of the different provider types within the ELICOS sector, the standalone ELICOS-only segment has been one of the most impacted with a 64.3 per cent decrease compared with 2020 Q2. Universities suffered a smaller decrease of 35.1 per cent to become the largest sub-sector of ELICOS with 1,370 students. In Q2 2021, the university segment actually increased ELICOS enrolments from some markets, including Japan (+38 per cent), South Korea (+60) and Colombia (+six). 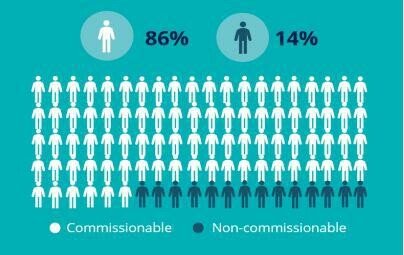 Agents accounted for 86 per cent of students enrolled in Q2. Source - English Australia/Bonard.

English Australia also examined differences in tuition fee for onshore and offshore programmes and found that of 66 colleges providing data, 49 did not vary prices.

In terms of staff impact, 54 colleges provided data on staffing and the authors found that 27 per cent of ELICOS employees lost their job in Q2 2021 and that more than two-thirds of those were seasonal workers.

Of full-time employees in the ELICOS sector, 40 per cent continued to work with no change to their arrangements while 16 per cent were released in Q2.

In a special webinar to unveil the research, Brett Blacker, CEO of English Australia, also presented the latest commencement data from the Department of Education, Skills and Employment (based on student visa holders only), showing a 68.6 per cent decrease for ELICOS in June 2021, compared with the same month in the previous year. He noted that this was the lowest level for the sector for 10 years.

Brett also highlighted the “dramatic decline” in offshore student visa grants for ELICOS alone study, which dropped by 95 per cent in the year-to-date June data from the Department of Home Affairs, compared with the same point of 2020.

Click here to access English Australia's quarterly data reports and here to see the video recording of the Q2 presentation.